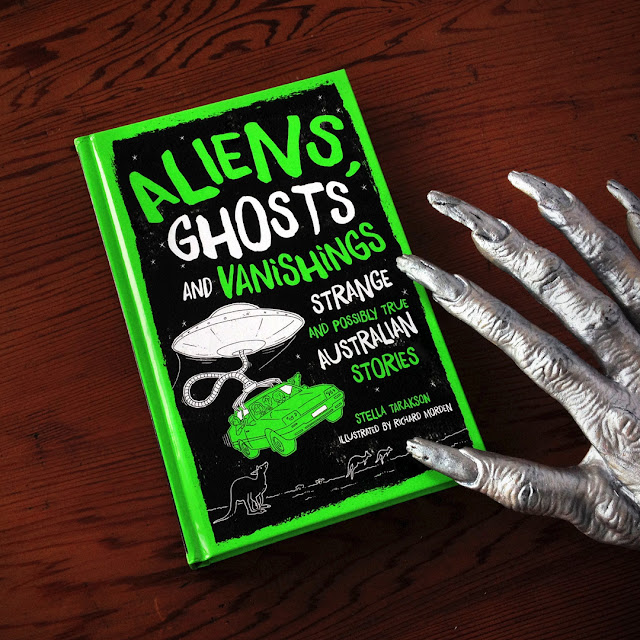 A year ago I was approached to illustrate Aliens Ghosts and Vanishings a book examining the most bizarre stories from Australia’s culture and history. It is a joyride of Australian gothic weirdness written for 10 to 15 year olds, however I enjoyed reading it and I’m quite a bit older than that.

Did a UFO drag a family’s car off the road in the middle of the outback? How did rocks rain from the sky in WA? And what became of the prime minister who went into the surf and was never seen again?

Explore the strangest tales, most incredible encounters and creepiest urban legends in Australia’s history. Read about the investigations and weigh up the facts – do you believe the official explanations for these weird and wonderful events?

Here's a few examples of the strange tales it examines...

Mythical creatures! This particular beastie is the Hawkesbury River monster, illustrated with the appearance of a plesiosaur. Next time you’re dabbling your toes in a river look carefully to be sure there is not one of these lurking in the deep. Chomp chomp! 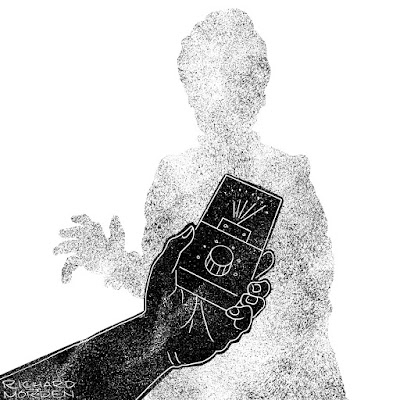 Haunted places! Some ghost hunters believe haunting spirits can be located with an electromagnetic field detector. Well I'm not so sure about that, but you can decide for yourself. 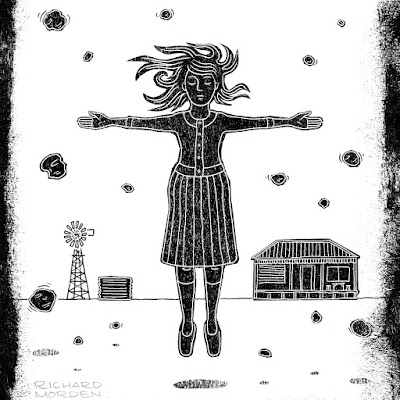 Mysterious locations! Have you heard of the falling stones of Mayanup, Western Australia? This is Audrey of Mayanup in the 1950s, around whom things would move strangely and rocks would appear, slowly falling to the ground. I'm not sure if she could actually levitate, but it felt appropriately telekinetic and spooky, so thats how I illustrated her. 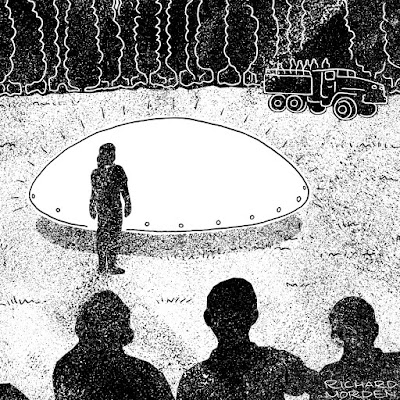 UFO Sightings! In 1966 in the Melbourne suburb of Westall more than 200 students and teachers from two schools saw a mysterious object land in a nearby grassy field. I was delighted when I learned I was to be illustrating a scene form the Westal UFO sighting. I had heard some of the witnesses speak at a convention and personally asked them to describe what they remember seeing and feeling when they approached the object. Best illustration reference ever. 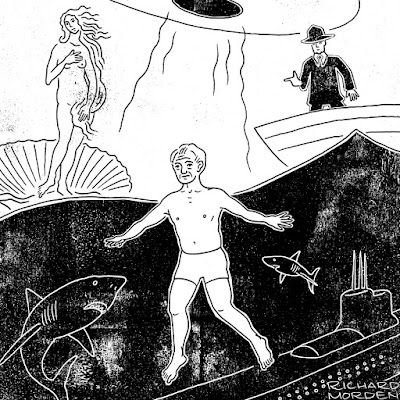 Bizarre disappearances! What was behind the disappearance of Australian Prime Minister Harold Holt? The conspiracy theories speak of a shark attack, CIA intervention, eloping with a love interest, UFO abduction, and even a Chinese submarine waiting to take him away!
This was the first illustration completed for Aliens Ghosts and Vanishings, setting the style for the rest of the images. The plan was to create dark, mysterious illustrations with simple line work and lots of texture. I was also keen not to patronise the teenage readers with twee illustrations, instead aiming high and assuming an audience of sophistication. 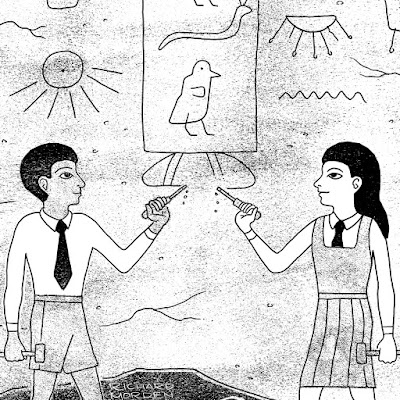 Strange happenings! Does the existence of the Gosford Glyphs prove ancient Egyptians travelled to Australia, or are the markings simply a prank by some cheeky school children? Hmmm, what would be more likely... let me think. Ancient Egyptians, obviously!

So many wonderfully strange tales. A book I thoroughly enjoyed illustrating.
Aliens Ghosts and Vanishings is available in stores and on-line November 2016.