map of the supercontinent Pangaea 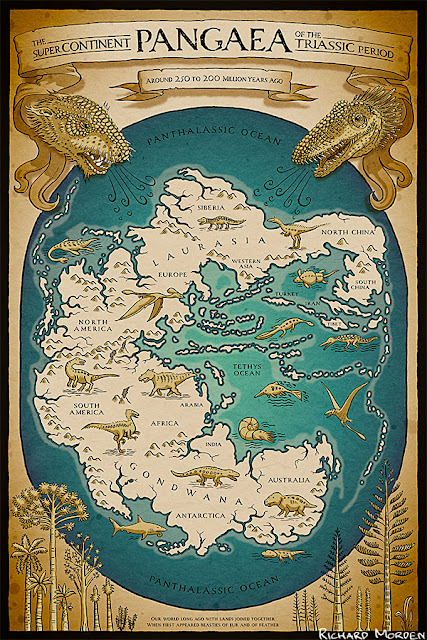 "Our world long ago, all the lands joined together

When first appeared beasties of fur and of feather"

This is a map of the world as it may have looked around 240 million years ago in the middle of the Triassic period. Drawn with pen and ink, coloured and textured digitally.

Two massive lands Gondwana and Laurasia had just bumped into each other, creating the Appelation Mountains and forming the supercontinent Pangaea.

Although there are other maps of Pangaea around, I could not find any illustrated in an old world style with monsters roaming the land and seas. So I just had to have a go at making one myself. Yep... nerd. I know.

Please note, I am an artist not a scientist. Although I did a fair bit of research to get it as right as I could, there is still plenty of artistic license. For instance, I made up all the rivers - sorry, I just couldn't find reference which told me where the real ones were. A few of the mountains could well be wrong too. And that volcano in between South America and Africa, well it just looked good there. So to any time travellers out there, this map is not to be used for navigation, it is decoration only!

This artwork is available to buy as poster art via Redbubble.

The animals featured are all carefully based on life that would have been kicking around within ten million years or so of that time. I intentionally didn't label them on the map, as I think leaving the creatures a little vague and generic aids imagination. Further more, when these creatures actually existed they didn't have titles such as Saurisichisan or Amonite, instead they would have thought of each other as 'the scaley thing with big teeth it is better not to go near' or 'the tasty little furred critter' or maybe 'the giant winged one who poos from the sky'.

But for the curious, and for a closer look at all the detail going on, here is a list of what the beasties are meant to represent. (You are allowed to scroll quickly through this bit. I am being a little self indulgent)

As you can see this artwork has an extraordinary amount of texture and detail. It is designed to look its best when printed at poster sizes. It would be ideal educational artwork for a classroom or decoration for a kids room.